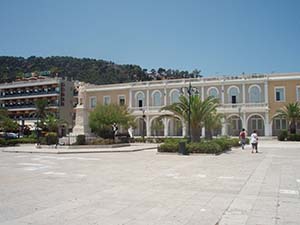 Zakynthos lies in the Eastern part of the Ionian sea, around 20 kilometers west of the Greek mainland (Peloponnese). The Island of Kefalonia lies 15 kilometers on the north. It is the southernmost of the main group of the Ionian Islands. Zakynthos is about 40 kilometers long and 20 kilometers wide, and covers an area of 410 km2. Its coastline is approximately 123 km long. The island has a population of 45,650. The highest point is Vrachionas, at 758 m.

The western half of the island is a mountainous plateau and the southwest coast consists mostly of steep cliffs. The eastern half is a densely populated fertile plain, with long sandy beaches.

The mild, Mediterranean climate and the plentiful winter rainfall endow the island with dense vegetation. The principal products are olive oil, currants, grapes and citrus fruit. The Zante currant, a small sweet seedless grape, is native to the island.

The bay of Laganas is the site of the first National Marine Park and the prime nesting area for loggerhead sea turtles (Caretta caretta) in the Mediterranean. The most famous landmark of the island is the Navagio beach. It is a cove with a shipwreck which is situated on the southwest shore, isolated by high cliffs. Numerous "Blue Caves", are cut into cliffs around Cape Skinari and have a phenomenal blue color.

Northern and eastern shores contain numerous wide sandy beaches, many of which are packed with tourists in summer months (May-October). The largest resort is Laganas, whose beach stretches for about 8 kilometers (4 miles).